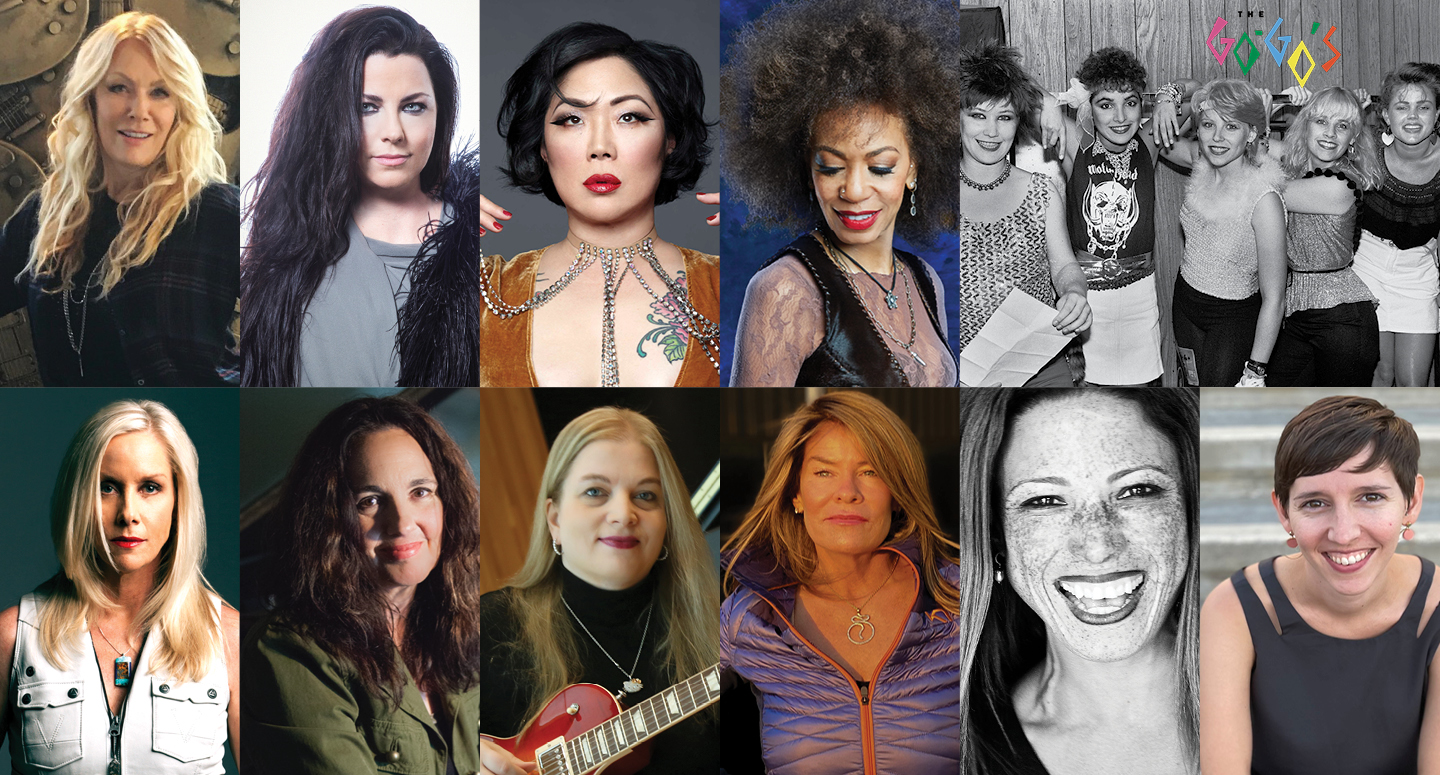 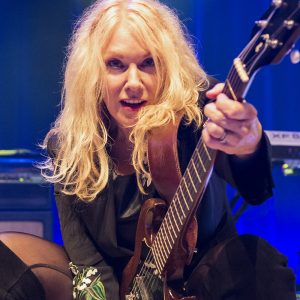 Nancy Wilson is celebrated as one of the seminal musicians in the history of rock n roll. A guitar virtuoso from the age of 9, Nancy (and her sister Ann) lead the multi-platinum rock group Heart, with 35 million records sold. Nancy is revered as an ingenious guitar player and as a gifted lead vocalist.  That’s Nancy singing on Heart’s first Number One hit, “These Dreams.”  As a songwriter, Nancy has co-written a collection of indelible songs that have earned their way into the classic rock canon including Magic Man. Crazy on You, Barracuda, and Straight On. During an era when females in rock n’ roll were scarce, Nancy helped carve out a place for women to front a band and dominate a rock stage. Her icon status was cemented when Heart was inducted into the Rock n’ Roll Hall of Fame in 2012.  That same year, she and her sister received a Star on the Walk of Fame in Hollywood. Nancy has also built a successful career as a film composer, with credits including  scores for the Cameron Crowe films Say Anything…, Almost Famous, Vanilla Sky and more. In 2020, Nancy turned her attention to recording the first solo album of her storied career, and signed with global label partner Carry On Music. Nancy plays guitar on and sings on all the songs on the entire album, which includes 9 new, original songs. The first single from the album is Nancy’s stunning rendition of Bruce Springsteen’s “The Rising.”  “A life of making music is truly a blessed life” – words from Nancy Wilson that ring true, and she continues to be inspired year after year. 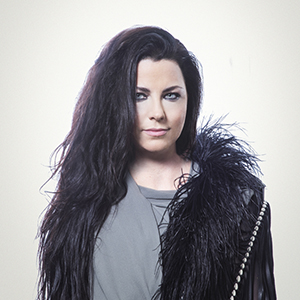 Amy Lee, lead singer of two-time GRAMMY® Award-winning Evanescence, has made an impact on people around the world. The group’s 2003 landmark debut album Fallen laid the foundation; spending 43 weeks on the Billboard Top 10 and selling more than 17 million copies worldwide. Alongside her work with the band, Amy has worked as a film composer, solo artist and as the American chairperson for the international epilepsy awareness foundation Out of the Shadows. In 2012, Amy was named Rock Goddess of the Year at the Loudwire Music Awards. Evanescense’s newest album, The Bitter Truth, is their first album of all new material in nearly a decade will be out March 26. 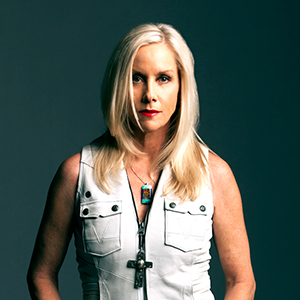 Cherie Currie’s extraordinary life reads like fiction. From her time as a teenage rock star to becoming an accomplished Chainsaw Carving artist, Cherie has always taken the road less traveled. Cherie was just 15 when she became the lead singer of The Runaways, and within a month the band secured a deal with Mercury Records. After leaving The Runaways, Cherie began a lengthy solo career that includes collaborations with Slash, Brie Darling, Billy Corgan, The Veronicas and more. Her most recent solo album, Blvds of Splendor, touches on her retro appeal while marking the strong foothold Cherie has cultivated in modern mass appeal. 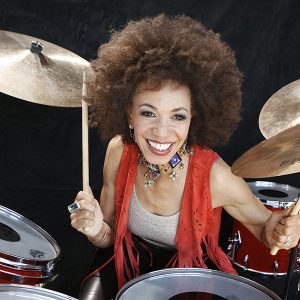 Over the course of her incredible three-decade career, virtuoso drummer Cindy Blackman Santana has proved that there isn’t a single genre of music she can’t master, nor is there a musician she can’t swing with. Even a cursory glance at her resume reveals such names as Lenny Kravitz, Joss Stone, Angela Bofill, and as they say, the list goes on. For the past decade, she’s been a mainstay on the drummer’s throne for the band Santana, led by her guitar icon husband, Carlos Santana. On her astonishing new solo album, Give the Drummer Some, Blackman Santana blurs genre labels and breaks down barriers as she blends pop, rock, funk, jazz, and much more throughout 17 tracks. 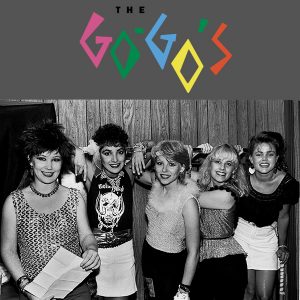 After breaking onto the Los Angeles music scene in 1978, the multi-platinum, all-female American band The Go-Go’s still rocks over three decades later. Born out of the L.A. punk scene, Charlotte Caffey (lead guitar, keyboards and vocals), Belinda Carlisle (lead vocals), Gina Schock (drums), Kathy Valentine (bass and vocals) and Jane Wiedlin (guitar and vocals) didn’t play the part of bad girls – they were genuine punk rockers. The Go-Go’s made history as the first, and to date only, all-female band that both wrote their own songs and played their own instruments to ever top the Billboard charts.  The Go-Go’s rose to fame during the early 1980s after the release of their 1981 debut album, Beauty and the Beat, which was #1 on the Billboard charts for six consecutive weeks, one of the most successful debut albums of all time. The album, which went triple-platinum in the US, was also on Rolling Stone’s list of “500 Greatest Albums of All Time” and it featured their hit singles “Our Lips Are Sealed” and “We Got the Beat.” In 1982, The Go-Go’s were nominated for a Grammy Award. In 2011, The Go-Go’s were honored with a Star on the world-famous Hollywood Walk of Fame.  “The Go-Go’s” Documentary premiered at the Sundance Film Festival in January 2020 to wide critical acclaim. It was released on Showtime on July 31, 2020 to general audiences.  The film follows the band from its punk rock beginnings to global stardom. 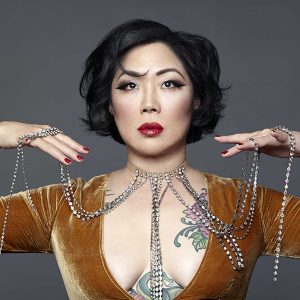 An accomplished performer in all formats, Margaret Cho could be called the “Queen of all Media” having conquered the worlds of film, television, books, music and theatre. Throughout her career, Cho has received five GRAMMY® Award nominations (including two for her most recent albums,Cho Dependent and American Myth). In 2017, Rolling Stone magazine named Cho one of the 50 Best Stand-Up Comics, calling her “the sort of funny, sex-positive feminist and LGBT activist younger comics continue to look up to.” In every segment of her life, Margaret is honest, forthright, passionate, uproarious and always entertaining. 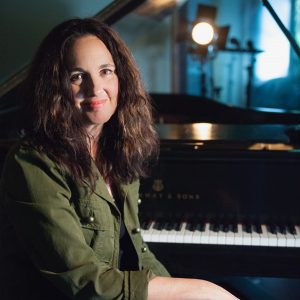 Starr Parodi first entered the public eye playing keyboards as part of the house band on the hit late-night Arsenio Hall Show and has played, toured or recorded with a wide array of artists including Carole King, George Howard, BB King and Mavis Staples. Since then she has become a vibrant part of the Los Angeles composing community, scoring hundreds of episodes of TV & film as well as being a passionate and innovative solo artist, pianist and producer whose work has been featured on NPR, The BBC, KCRW and iHEART Radio. As a multi award-winning composer, Starr has had her symphonic works premiered at Lincoln Center, received a gold record for her production/arrangement of the James Bond Theme and is the first woman to have her compositions performed in the 87-year history of the Festival of Arts-Pageant of the Masters where she is currently a featured composer. Starr is also currently president of the Alliance for Women Film Composers and champions opportunities for women in film and TV.

Sharon Hennessey is the President of On-Stage, The Music People (a division of JAM)and the driving force behind the company’s two brands, On-Stage and TMP-Pro. With her motivational spirit and remarkable business acumen, Sharon has been instrumental in the company’s continued growth. Passionate about supporting women in the music industry, Sharon mentors for NAMM’s Smart Women in Music Fund (SWIM) and is a dedicated champion of the Women’s International Music Network (WiMN) and the She Rocks Awards. 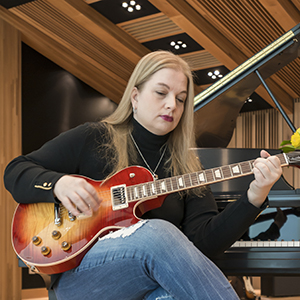 Tavistock – The Sanctuary – Albany, The Bahamas

Ann Mincieli is a renowned Engineer, Mixer, Collaborator and Album Project Manager for Alicia Keys. Since 2018, Mincieli has been involved with She is the Music, a nonprofit organization dedicated to increasing the number of women working in music across all levels. The 2x GRAMMY® winner has worked with some of music’s biggest acts including Mariah Carey and Jay-Z, among others. Mincieli is the owner of Jungle City Studios, which is one of New York’s most elegant and best equipped recording facilities in the world. As a prominent leader in the music industry, Mincieli has been at the forefront of the movement to restore Manhattan to its former prestige as one of the world’s top recording destinations. 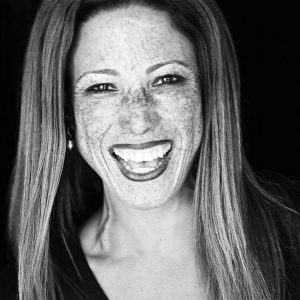 Gwen Bethel Riley is the SVP of Music for Peloton Interactive, the largest global interactive fitness platform with over 3.1M members. Riley is known for her artist-centric approach to identifying opportunities for talent in new and emerging technology platforms. For 20 years, she has sourced, produced, licensed and developed key music integrations for some of the entertainment industry’s most influential artists and studios—creating placement, distribution and promotional opportunities for artists in award-winning technology platforms, digital content, games, consumer products and feature films. 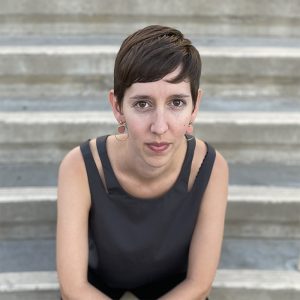 Kim Warnick is the Executive Director of Calling All Crows, a musician-founded nonprofit that channels the power of live music toward change for womxn and girls by engaging music fans in activism and service with musicians and community organizations. They launched the #HereForTheMusic campaign in 2017 to prevent sexual violence at concerts and festivals, and have since worked with over 75 festivals, venues, and bands to build true safety into our industry. Kim is a professional with program design, project management, event production, facilitation, and communications experience. After 9 tours with 3 different artists, she has opted to get off the road and settle into Long Beach, CA. She holds a BA in Sociology from Harvard University, where her studies focused on social movements, organizational culture, and conflict and peacebuilding, including an intensive study in Rwanda. These studies alongside a decade as an activist and organizer position her to build cultural activist campaigns with community leaders, artists, and music fans in the pursuit of a more just world for womxn and girls. 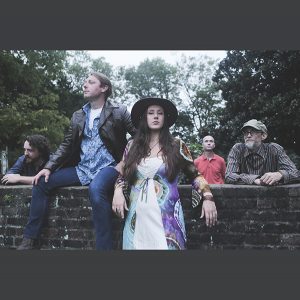 Magnolia Boulevard’s music is an intuitive and intense conversation between musicians that extends from the stage out into the audience – and that is now set to be shared with the world at large. There’s plenty of blues, soul and rock ‘n’ roll in the mix, but also elements of funk, jam band, folk, country, bluegrass and psychedelia. It’s all fueled by the rhythm section’s elastic grooves, shot through with guitarist Gregg Erwin’s expressive and incisive slide guitar licks, and topped by Maggie Noelle’s soul-stirring, powerhouse vocals.